Many industrial sensors are realized using Wheatstone Bridges; in these cases, the sensors, being variable resistors, have their signals reflected as small differential voltages with maximum output voltages in the range of 25-50mV. The function of a Sensor Interface Conditioner (SIC) is to amplify and condition these signals so they can be communicated to an output device; often this means a computer that might be a significant distance from the sensor (possibly in a different geographic location). The SIC is usually close to the sensor, and traditionally the communication to the output device would be done using the industry standard 4-20mA 2-wire interface. Only recently, are SIC's becoming available where the communication to the output device is done using digital signals and a serial interface. Granite SemiCom Inc. (GSC) has developed a SIC with specifications close to the best in the industry, where the digital signals are transmitted to a small computer board using an I2C digital serial link. GSC has also developed a Demonstration System based on Distributed Intelligent Sensor Systems (DISS's) that teaches how to use the SIC's and to verify their excellent specifications, that can be used to program the SIC's using either a Graphical User Interface (GUI) or a script from a file (or both), and that can also be used to remotely control and debug DISS's from locations almost anywhere on earth; as long as an Internet link exists. Shown is a high-pressure sensor that contains GSC's SIC and communicates the the shown small-board computer, which then communicates to the host computer over a USB cable; CAT-5 and WiFi connections to the host are also supported.

Shown is GSC's SIC being evaluated for use as the interface to an Industrial High-Pressure Sensor produced by MorHEAT Inc. (www.morheat.com) for “Melt Pressure” applications; GSC''s SIC is inside the sensor housing and connected to a smart computer board using the I2C interface; the demonstration software all runs on the computer board but the higher levels can run on remote host computers. In the Demonstration System, with all the GUI software running on the small computer board, the output of the software is communicated to a host computer using a secure encrypted link based on the SSH protocol with the -X option specified (that allows remote X-windows viewing). In this picture, the SSH connection to the host computer is through a USB cable; alternatives that have been developed are through 100Mbs Ethernet cables or wirelessly using WiFi. Any controller or smart computer board that supports I2C can be connected to GSC's SIC; for the Demonstration System, the controller is based on using the Beaglebone Black computer with a Controller Interface Board (CIB) also developed by GSC and supplied with its Demonstration System. The CIB allows for 4 SIC's to be interfaced with a single board; it also has an 8-bit GPIO parallel interface, temperature sensor, programmable power supply, and supply voltage and temperature measurement feedback for robust operation and remote debugging.

A Sensor Controller Interface Board (CIB) has also been developed, and is supplied as part of GSC's Demonstration System. The Demonstration System helps teach how to program the SIC's, and to demonstrate their functionality and accuracy. GIC's Controller Interface Board (often called a “Cape” ) connects to the Beaglebone Black (BBB) computer board available from Sparkfun (www.sparkfun.com) and other distributors. The BBB is relatively fast, has lots of memory, both RAM and non-volatile (a 4Gbyte eMMMC), enables connecting to the Internet for remote control and communication straight-forward, and with its Debian operating system, provides a wealth of open-source software that greatly minimizes development time. For example, secure encrypted communication to the Internet using SSH is used. However, using the BBB is just one alternative; the SIC's can alternatively be connected to any controller that has an I2C interface, and GSC with its Design Services Model readily supports program development for connecting to alternative controllers. GSC's Demonstration System includes a pre-programmed BBB and Cape Interface Board to simplify users getting started; the Demonstration System also includes 4 SIC's, and a Sensor Emulator Board including a pressure sensor.

The Controller Interface Board (CIB) allows four SIC's to be connected to the CIB and used at the same time, even when they have identical Device addresses. Indeed, each of the four I2C channels can also be connected to multiple Devices, but all Devices on a single channel must have unique addresses. The number of channels can be expanded on custom boards in response to a customer's request. 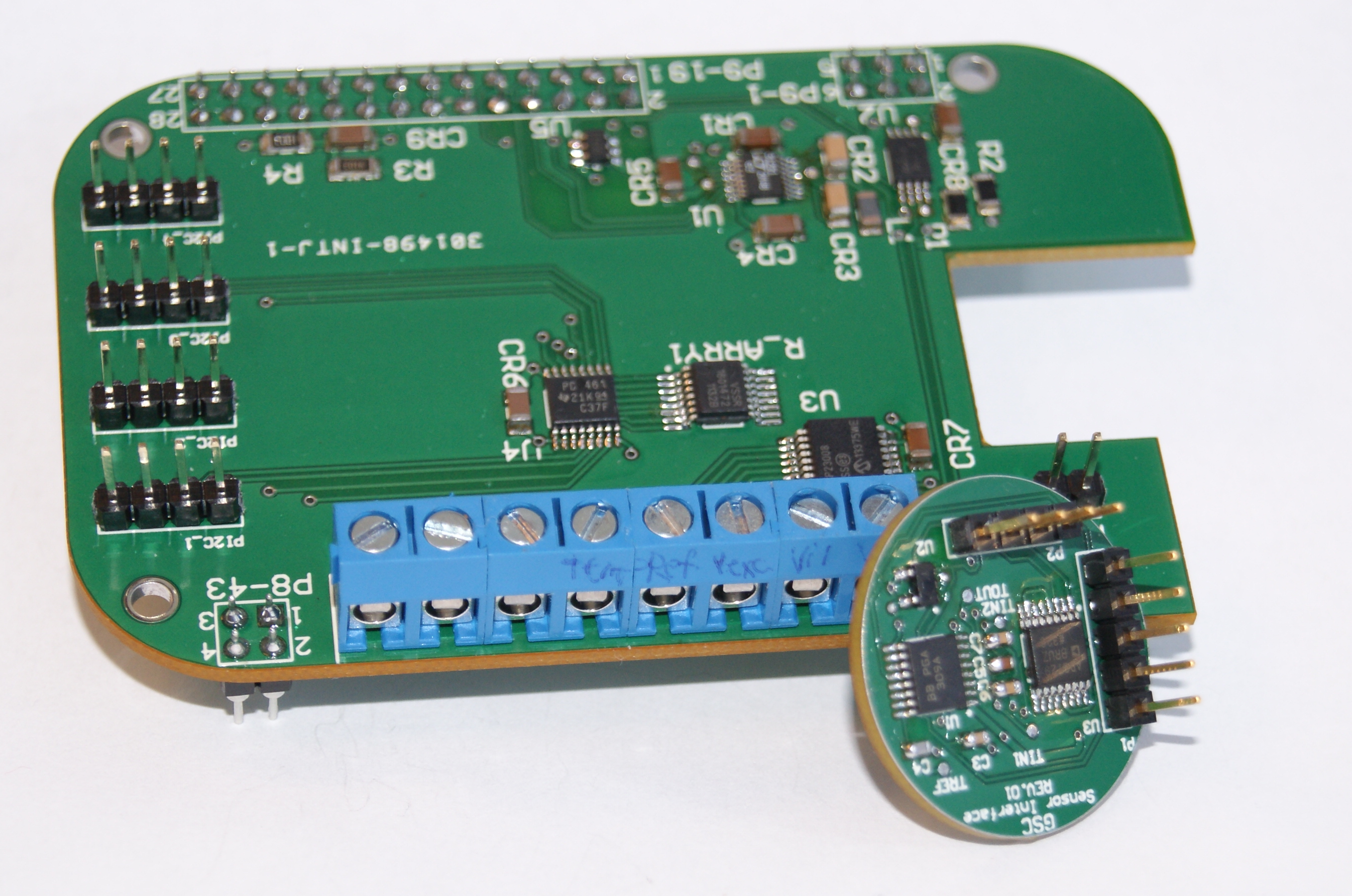 The software interface to the SIC's supports interfacing using either Graphical User Interfaces (GUI's), using a script programming interface where the programs are previously stored in files, or optionally using both approaches. Detailed help on the software interfaces is included in the extensive help files of the GUI's supplied with the Demonstration System.

The software approach recommended by GSC is to separate the details into three different Abstraction Levels: the User Level, the Programming Level, and the Driver Level. For the GSC Demonstration System, the User Level is a GUI showing 4 meters and digital readouts, one for each of the 4 sensors attached to the CIB (Cape Interface Board). The User GUI has buttons to start and stop sampling, to plot the results of sampling, and to display (or hide) the GUIs for lower levels of abstraction, namely the Programming GUI (PGUI), and Device Register Interface GUI (DGUI). The PGUI is displayed and changed when it is desired to program the SIC's differently than their default values. The DGUI is only displayed, and possibly changed, when the sensor interfaces are being debugged. Both of these top level GUI's can be run remotely assuming an Internet communication channel.

The Sensor Interface Conditioners (SICs) are available in minimum quantities of 10. The Demonstration Platform consisting of a pre-programmed Beagleboard Black computer board, a GSC Controller Interface Board (CIB), 4 SICs, and a Sensor Emulator Board is available in minimum quantities of 1. Please contact GSC for pricing information in both cases.

The SIC and CIB developed by GSC are described in more detail along with specifications in a White Paper.