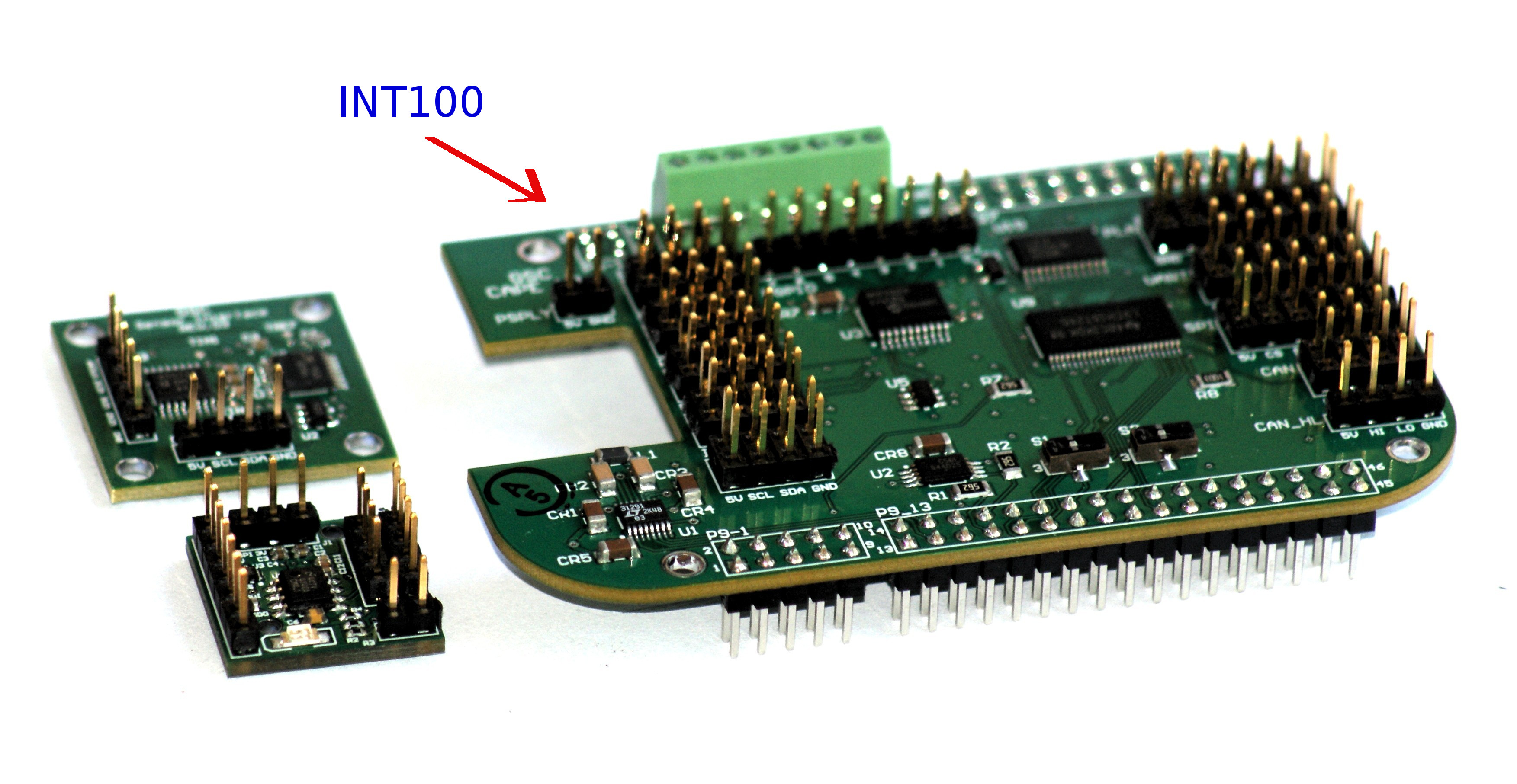 The Controller Interface Board (INT100) is used to demonstrate the GSC interfaces INT101 and INT102, and is also intended to accellerate fast prototyping of digital sensor interfaces in general. It is designed to be used with the Beaglebone Black (BBB) small-board computer. This allows for operation in remote locations using either wired ethernet or WiFi. The INT100 supports the I2C interface, the SPI interface, the UART interface, and the COM interface. The outputs of all interfaces are level translated and buffered from the BBB's 3.3V to 5V. The I2C interfaces has four channels; multiple I2C devices can be connected to each channel as long as their addresses are not the same; I2C devices on different channels can have the same address as they are connected to an I2C multiplexor. There is also an 8-bit General Purpose digital I/O that can be used for custom applications. If desired, some of its outputs can be used for SPI chip selects which allows for multiple SPI devices to be connected to the SPI interface. The INT100 includes a digitally programmable regulator with an output voltage measurement to verify the output voltage is correct. A separate temperature measurement sensor is included for enhanced robustness. A 256 kbyte EEPROM has been included to store register configuration values, calibration values, indentification values, etc. A real-time-clock, and clock battery, have been included which allow for stand-alone operation when the internet is not available for setting the time at boot up (a significant limitation of the BBB which the INT100 alleviates). This is necessary for accurate time logging of sensor measurements. All output signals are connected to headers to simplify connecting to sensors without requiring additional boards. Finally, the INT100 includes a built-in real-time logic analyzer that can sample interface signals at frequencies up to 50MHz. All outputs have additional header pins to simplify hooking up to the logic analyzer which allows for remote debug in the case of hardware failure. This capability is only available with the BBB small board computer as it includes two real-time coprocessors. Currently software including Graphical User Interfaces (GUIs) has been developed that supports the I2C interfaces, the SPI interfaces, voltage and temperature measurements, voltage programming, logic analyzer operation including timing analysis plots, sensor output plots, and time-stamped logging of sensor measurements. Software to support the UART and COM interfaces will be developed based on demand.